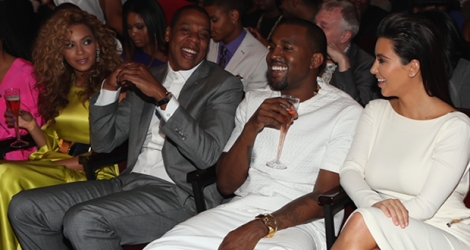 The holy quad was at the BET Awards last night…I’m sure you were all too busy celebrating Canada Day. Among the highlights: D’Angelo returned to national television, Jay Z pulled a Kanye on Kanye West, Brandy, Monica, Rob Houston, Chaka Khan and Cissy Houston teamed up for the Whitney Houston tribute. Beyonce also defended Lauryn Hill. Anyway, Vulture’s got your highlights.

Here are two new songs from Blur: Under the Westway and The Puritan.

HBO has renewed The Newsroom and True Blood.

I love how Oh No They Didn’t has labelled the TomKat split as “Marriage Impossible (3).” Here’s basically what you need to know about MI:3 — the marriage was pretty much over last year. Sure, Scientology played a big role in the split, but it might have had more to do with Suri’s involvement in the cult as opposed to Katie’s (Katie is filing for sole custody). Apparently, Tom wanted to send Sui to some compound called the Sea Org, but Katie put a stop to it after she saw how Tom’s other (adopted) kids were, mainlyIsabella. Katie is also firing those under Tom’s payroll (including her publicist) and she’s hired her own security team. I’m so happy that Katie isfree. So happy, that I almost went looking for that bristol board of Katie Holmes/Dawson’s Creek photos I used for my Grade 7 biography project on Katie.

Could the new Killers track be called “Runaways”? They posted what appears to be new cover art on Facebook earlier today. The new album, Battle Born, will be released this fall.